Okay, on this faithful morning, I reawoke. 😂 Yeah, I woke up a second time after the first time; and getting back to bed. But I had aches all over my back; which was part of what prompted me getting back to sleep the second time. It felt like I lashed wood instead of sleeping through the night. 😪 God knows I was reluctant to get off this time. But then i had to. I told myself I had to, when my mind played the view of things I had to do and shouldn’t miss it for the day.

So yeah, I eventually got off the bed. Somebody say hallelujah!. 😂 But I was so sluggish. Even while washing the dishes I was praying in my heart that I wouldn’t break a dish. As i just couldn’t place why i had the ache at all.

Countdown to few hours after my hesitation to get off bed, i feel so good. 🙌 I can’t even remember there was such an ache in the first place. I have accomplished part of the day’s plan. And should head out to eat soon. 😘

But then it occurred to me, if i had chosen to stay back in bed instead of getting up, i would have still been fagged despite the hours of sleep. But miraculously my decision to get off the bed despite the ache i was still feeling, made it all better.

So what then am i trying to communicate. You might be in such a state that yeah, you have tried so hard the first time and then the second time and maybe it’s your fourth or fifth etc, and it still seems as though things are not getting any better. Why don’t you stay up?. Don’t retire to self-doubt or even doubting God and His good will for your life. You might not have made it so far, as you would have wanted. And might not have gotten your most desired result despite your several attempts but i want you to know, your healing and change is in staying right up. Stay awake. Stay working, stay active and above all stay trusting.

No one got better or discharged off an hospital bed for example, without getting off the sick bed in the first place. You have to get up if you had retired to giving up already or if you are at the verge of quitting, please stay up. Your most desired victory is right around the corner. Much closer than you expect.

It might not seem to be getting any better even when you get off initially; just as i was still very much aching when i stood up. But you will get better. That pain or ache will have no choice than to let you go since you decided to stay up and stay focused on God.

So dear reader, stay up. Stay focused and don’t relent in staying connected. Your constant and continuous decision to always look right up to God makes so much difference. The courage you need to get up is right there in you already. Tap into it; activate it and c’mon let’s keep moving.

We are not quitters. We are not stopping. We are keeping the hope and trust in Him alive. ❤💞

So let’s not allow ourselves to get fatigued doing good. At the right time we will harvest a good crop if we don’t give up, or quit.

Stay connected to your source folks. And enjoy the week. 🌼 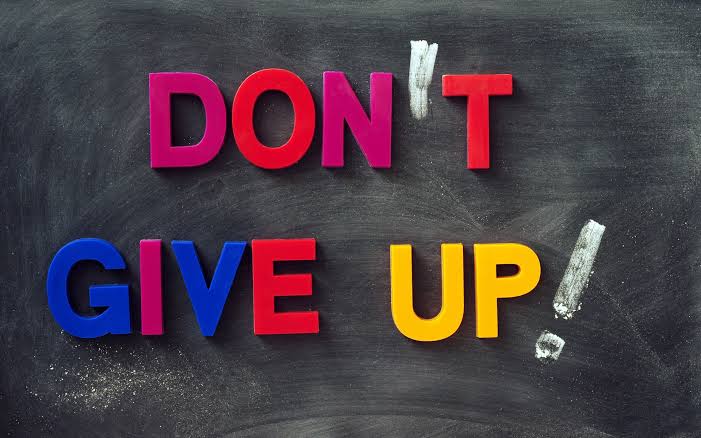 Photo Sources: Mine and Google

#Giving up not an option