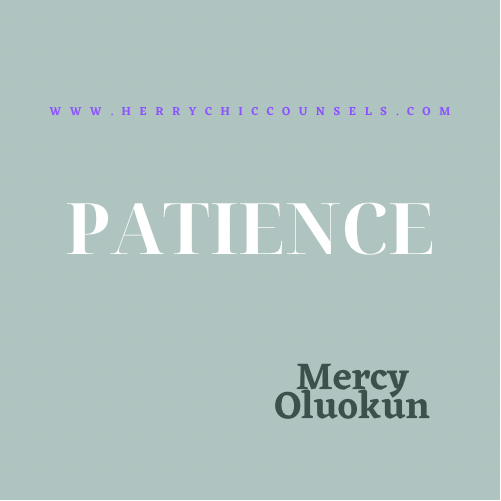 On my return from work on a particular evening. I was in a Tricycle heading to my street. We had only moved a bit from the park, where the other tricycles were, when the driver in the one I boarded yelled out to another tricycle driver, “You were supposed to be the next in line, but you were in so much hurry”. This he said in Yoruba and he was annoyed at the same time. It was later on I figured out that he was feeling sorry for the other tricycle driver that he couldn’t help the emotions that accompanied it.

Apparently this other tricycle driver should have been the next in line for passengers to board. But because he left the park in a haste he couldn’t. And although we saw him ahead of us (before we caught up with him), his tricycle was still empty. Sad yeah 🥲

This is the case for most of us too. The more we clamor for all the good things life can bring to us. The more we lose sight of who holds this life in the first place, God. Have you been so caught up in achieving that goal that you have ran past your next stop or ran ahead of Him, thinking He is so slow and you can make it happen by your own strength or in your own way?

“So he said to me, “This is the word of the Lord to Zerubbabel: ‘Not by might nor by power, but by my Spirit,’ says the Lord Almighty.”

So many times we need to ask ourselves this sincere question – Am I walking alongside Jesus or am I taking the walk on my own and on my own speed? If we do not take caution, by learning to slow down and listen for His voice, we will end up like Samuel at first. Who heard God’s voice but couldn’t decipher His voice enough, to further ask for the instruction God had for him. And instead of asking God “speak Lord your servant is listening”, he kept running back to Eli. (Paraphrased)

“Then the Lord called Samuel. Samuel answered, “Here I am.” And he ran to Eli and said, “Here I am; you called me.” But Eli said, “I did not call; go back and lie down.” So he went and lay down.

Now Samuel did not yet know the Lord: The word of the Lord had not yet been revealed to him. A third time the Lord called, “Samuel!” And Samuel got up and went to Eli and said, “Here I am; you called me.” Then Eli realized that the Lord was calling the boy.

The Lord came and stood there, calling as at the other times, “Samuel! Samuel!” Then Samuel said, “Speak, for your servant is listening.” And the Lord said to Samuel: “See, I am about to do something in Israel that will make the ears of everyone who hears about it tingle.”

Abba is a father that speaks to us and is always present but most times we are so caught up in achieving many things that we lose sight of what He has for us to do. And we keep marking earthly achievements but whereas our purpose plan is gathering dusts and we feel we are achieving great things in life. 🥲

It is not enough to do what everyone is doing. But it is enough if you are rightly placed in Him. Doing all that He has named you to do and making Him proud all the way.

““You are the light of the world. A town built on a hill cannot be hidden.

In the same way, let your light shine before others, that they may see your good deeds and glorify your Father in heaven.”

Again I ask – how patient are you to listen to His “next” plan or action for your life and act on it, rather than just sitting with the quickening or promptings alone?

It is not enough to hear Him call out to you. Rather we need to be patient enough to listen to His instruction – His plans for you and me. May we develop listening ears to listen and not be too much in a hurry that we miss out of His kind of fulfilling life. Amen!