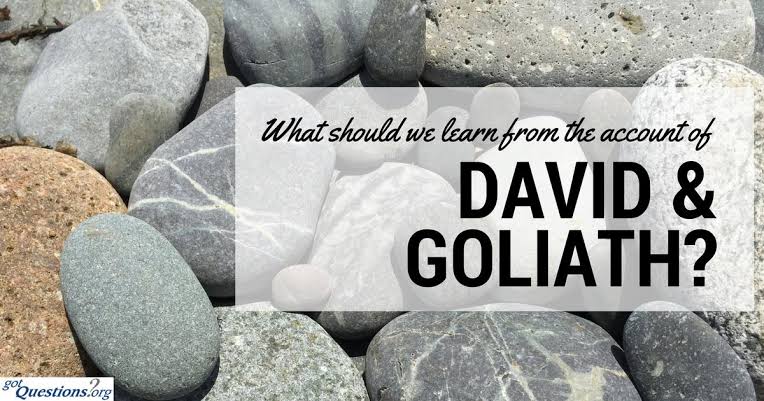 The Philistines and the Israelites were at war during the second half of the eleventh century BCE under the leadership of King Saul, both pitched their tents on both sides of a hill facing one another with their armies. Neither dared to move, to attack meant descending down the hill and then making a suicidal climb up the enemy’s ridge on the other side. Finally, the Philistines had enough as they sent their greatest warrior down into the valley to resolve the deadlock one on one. He was a giant, six foot nine at least, wearing a bronze helmet and full body armor. He carried a javelin, a spear, and a sword. An attendant preceded him, carrying a large shield. The giant faced the Israelites and shouted out: “Choose you a man and let him come down to me! If he prevails in the battle against me and strikes me down, we shall be slaves to you. But if I prevail and strike him down, you will be slaves to us and serve us.”

In the Israelite camp, no one moved. Who could win against such a terrifying opponent? Then, a shepherd boy who had come down from Bethlehem to bring food to his brothers stepped forward and volunteered. Saul objected: “You cannot go to this Philistine to do battle with him, for you are a lad and he is a man of war from his youth.” But the shepherd boy was adamant. He had faced more ferocious opponents than this, he argued. “When the lion or the bear would come and carry off a sheep from the herd,” he told Saul, “I would go after him and strike him down and rescue it from his clutches.” Saul had no other options. He relented, and the shepherd boy ran down the hill toward the giant standing in the valley. “Come to me, that I may give your flesh to the birds of the heavens and the beasts of the field,” the giant cried out when he saw his opponent approach. Thus began one of history’s most famous battles. The giant’s name was Goliath. The shepherd boy’s name was David. 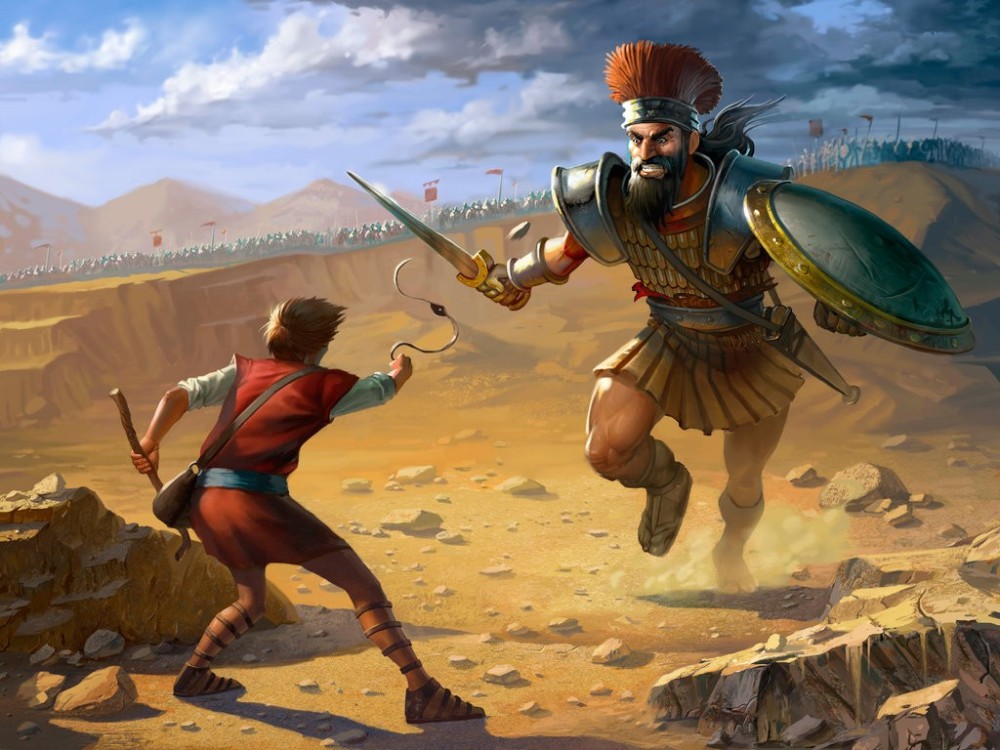 This article is all about the likely outcome; when ordinary peopleconfronts the giants. By “giants,” I mean powerful opponents of all kinds—from armies and mighty warriors to disability, misfortune, and oppression. Each person—famous or unknown, ordinary or brilliant—who has faced an outsize challenge and been forced to respond. Should I play by the rules or follow my own instincts? Shall I persevere or give up? Should I strike back or forgive?.

There are two ideas about David and Goliath, The first is that much of what we consider valuable in our world arises out of these kinds of lopsided conflicts, because the act of facing overwhelming odds produces greatness and beauty. And second, that we consistently get these kinds of conflicts wrong. We misread them. We misinterpret them. Giants are not what we think they are. The same qualities that appear to give them strength are often the sources of great weakness. And the fact of being an underdog can change people in ways that we often fail to appreciate: it can open doors and create opportunities and educate and enlighten and make possible what might otherwise have seemed unthinkable.

Goliath was expecting a warrior like himself to come forward for an hand-to-hand combat. It never occurred to him that the battle would be fought on anything other than those terms, as he had prepared accordingly. To protect himself against blows to the body, he wore an elaborate tunic made up of hundreds of overlapping bronze fishlike scales. It covered his arms and reached to his knees and probably weighed more than a hundred pounds. He had bronze shin guards protecting his legs, with attached bronze plates covering his feet. He wore a heavy metal helmet. He had three separate weapons, all optimized for close combat. He held a thrusting javelin made entirely of bronze, which was capable of penetrating a shield or even an armour. He had a sword on his hip. And as his primary option, he carried a special kind of short-range spear with a metal shaft as “thick as a weaver’s beam.” It had a cord attached to it and an elaborate set of weights that allowed it to be released with extraordinary force and accuracy. Then David appears. Saul tries to give him his own sword and armour so at least he’ll have a fighting chance. David refuses. “I cannot walk in these,” he says, “for I am unused to it.” Instead, he reaches down and picks up five smooth stones, and puts them in his shoulder bag. Then he descends into the valley, carrying his shepherd’s staff. Goliath looks at the boy coming toward him and is insulted. He was expecting to do battle with a seasoned warrior. Instead he sees a shepherd—a boy from one of the lowliest of all professions—who seems to want to use his shepherd’s staff as a cudgel against Goliath’s sword. “Am I a dog,” Goliath says, gesturing at the staff, “that you should come to me with sticks?”

What happens next is a legendary story. David puts one of his stones into the leather pouch of a sling, and he fires at Goliath’s exposed forehead. Goliath falls, David runs toward him, seizes the giant’s sword, and cuts off his head. “The Philistines saw that their warrior was dead,” the biblical account reads, “and they fled.”

The battle is won miraculously by an underdog who, by all expectations, should not have won at all. This is the way we have told one another the story over the many centuries since. It is how the phrase “David and Goliath” has come to be embedded in our language—as a metaphor for improbable victory. And the problem with that version of the events is that almost everything about it is wrong.

Ancient armies had three kinds of warriors. The first was cavalry—armed men on horseback or in chariots. The second was infantry—foot soldiers wearing armour and carrying swords and shields. The third were projectile warriors, or what today would be called artillery: archers and, most important, slingers. Slingers had a leather pouch attached on two sides by a long strand of rope. They would put a rock or a lead ball into the pouch, swing it around in increasingly wider and faster circles, and then release one end of the rope, hurling the rock forward. Slinging took an extraordinary amount of skill and practice. But in experienced hands, the sling was a devastating weapon. Paintings from medieval times show slingers hitting birds in mid-flight. Irish slingers were said to be able to hit a coin from as far away as they could see it, and in the Old Testament Book of Judges, slingers are described as being accurate within a “hair’s breadth.” An experienced slinger could kill or seriously injure a target at a distance of up to two hundred yards. 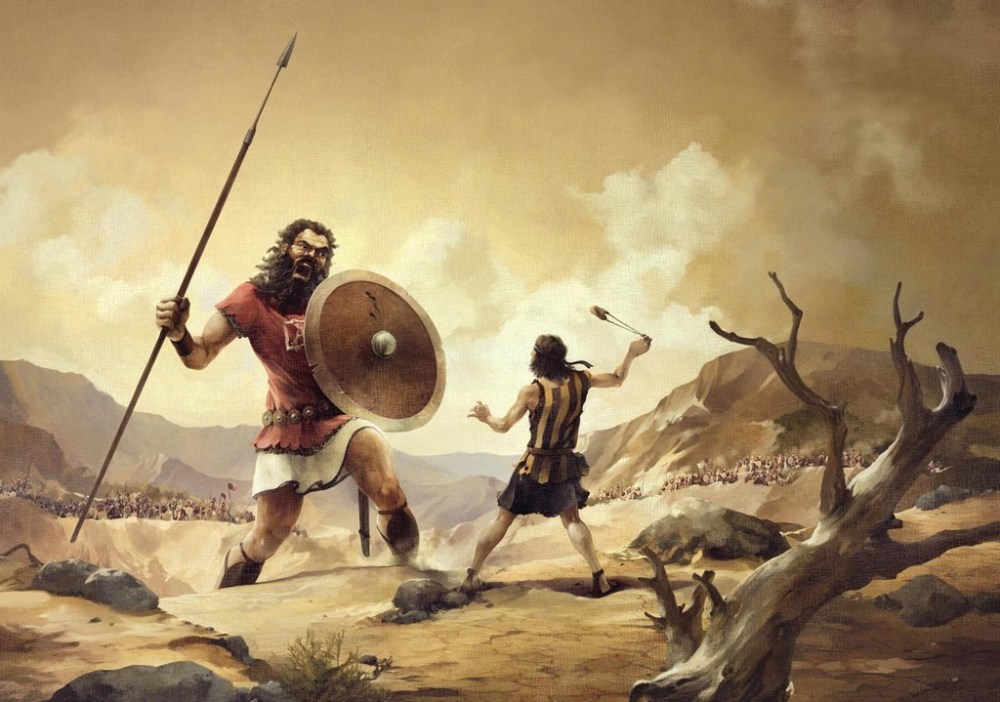 Goliath is heavy infantry. He thinks that he is going to be engaged in a duel with another heavy-infantryman. When he says, “Come to me, that I may give your flesh to the birds of the heavens and the beasts of the field,” the key phrase is “come to me.” He means come right up to me so that we can fight at close quarters. When Saul tries to dress Davidarmormour and give him a sword, he is operating under the same assumption. He assumes David is going to fight Goliath hand to hand. David, however, has no intention of honouring the rituals of single combat. When he tells Saul that he has killed bears and lions as a shepherd, he does so not just as testimony to his courage but to make another point as well: that he intends to fight Goliath the same way he has learned to fight wild animals—as a projectile warrior.

He runs toward Goliath, because without armour he has speed and manoeuvrability. He puts a rock into his sling, and whips it around and around, faster and faster at six or seven revolutions per second, aiming his projectile at Goliath’s forehead—the giant’s only point of vulnerability. What could Goliath do? He was carrying over a hundred pounds of armor. He was prepared for a battle at close range, where he could stand, immobile, warding off blows with his armor and delivering a mighty thrust of his spear. He watched David approach, first with scorn, then with surprise, and then with what can only have been horror—as it dawned on him that the battle he was expecting had suddenly changed shape.

“You come against me with sword and spear and javelin,” David said to Goliath, “but I come against you in the name of the Lord Almighty, the God of the armies of Israel, whom you have defied. This day the Lord will deliver you into my hands, and I’ll strike you down and cut off your head.…All those gathered here will know that it is not by sword or spear that the Lord saves; for the battle is the Lord, and he will give all of you into our hands.”

Twice David mentions Goliath’s sword and spear, as if to emphasize how profoundly different his intentions are. Then he reaches into his shepherd’s bag for a stone, and at that po,int no one watching from the ridges on either side of the valley would have considered David’s victory improbable. David was a slinger, and slingers beat infantry, hands down.
“Goliath had as much chance against David,” the historian Robert Dohrenwend writes, “as any Bronze Age warrior with a sword would have had against an [opponent] armed with a 45 automatic pistol.” Why has there been so much misunderstanding around that day in the Valley of Elah? On one level, the duel reveals the folly of our assumptions about power. The reason King Saul iskepticalal of David’s chances is that David is small and Goliath is large. Saul thinks of power in terms of physical might. He doesn’t appreciate that power can come in other forms as well—in breaking rules, in substituting speed and surprise for strength. Saul is not alone in making this mistake.

What the Israelites saw, from high on the ridge, was an intimidating giant. In reality, the very thing that gave the giant his size was also the source of his greatest weakness. There is an important lesson in that for battles with all kinds of giants. The powerful and the strong are not always what they seem. David came running toward Goliath, powered by courage and faith. Goliath was blind to his approach—and then he was down, too big and slow and blurry-eyed to comprehend the way the tables had been turned.

At different levels of our journey in life, we face different giants and this story goes to show that the giants we face are not who they really are and we also tend to have a wrong impression about them. God Almighty has given us the capacity already to defeat these giants even before we face them. We just have to tap into that power and grace to defeat these giants as David did and give all the glory to God.

#Seeing beyond the enemy’s fuss